As published in Informed Infrastructure Magazine, August 2015, by Matt Ball

Offsetting Impervious Surface Helps Recharge for the Next Emergency

The state of emergency in California due to the drought continues to compound as there is little change in rain and snow patterns in the forecast. The issue is bigger than drying streams and lake beds because groundwater is being depleted and along with it goes the future capacity to address shortfalls. Rather than having water in the ground to draw on in lean times, the state is dipping into reserves that will be difficult to build back to sustaining levels.

In order to meet the current challenge, and to plan ahead, the regional Water Quality Control Boards across the state are crafting regulations to recharge these water resources. The biggest issue at hand is that designs of the past, coupled with aging and underperforming infrastructure, have turned out to be the opposite of today’s best management practices. 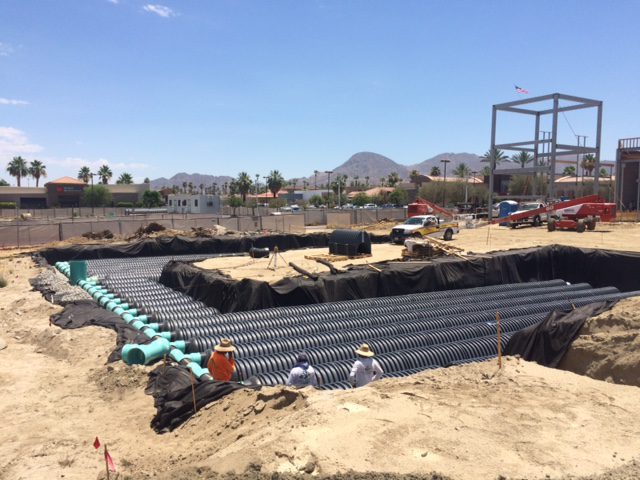 “Southern California’s stormwater infrastructure was designed and constructed for very different environmental circumstances and demands than we are experiencing today,” says Judd Efinger, Western Regional Manager at Prinsco, Inc. “We urgently need to shift our thinking and make a paradigm shift on how we manage one of our greatest resources — water.  Rather than conveying stormwater out to the ocean, we must be more responsible in our treatment, retention, and infiltration practices. Everyone knows that it’s an issue, it’s just a matter of how long it will take us to turn such a large ship.”

At the root of the problem is the amount of built infrastructure and the quantity of impervious surface across densely populated areas, which is particularly acute in Southern California. In a 2012 study published in Urban Forestry & Urban Greening, “Tree and Impervious Cover Change in U.S. Cities,” looked at 20 metropolitan areas over the course of five years to determine shifts in green areas and impervious surfaces.

Using satellite imagery, the findings showed that Los Angeles had by far the greatest annual increase in impervious surface and lost green space. The report calculated that an average of 550 hectares are lost per year. Most of the areas originally with trees were converted to grass (47 percent), followed by impervious cover such as buildings, roads and parking lots (29 percent) and bare soil (23 percent).

“In the past several years, we’ve recognized that change in impervious surface needs to be dealt with,” says Brad Losey, P.E., Project Manager, Michael Baker International. “It can’t just be directed to storm drains and sent out to the ocean. It has to be grabbed and retained. If we can hang onto it and get it back into the groundwater supply, it’s definitely a benefit to the overall water cycle.” 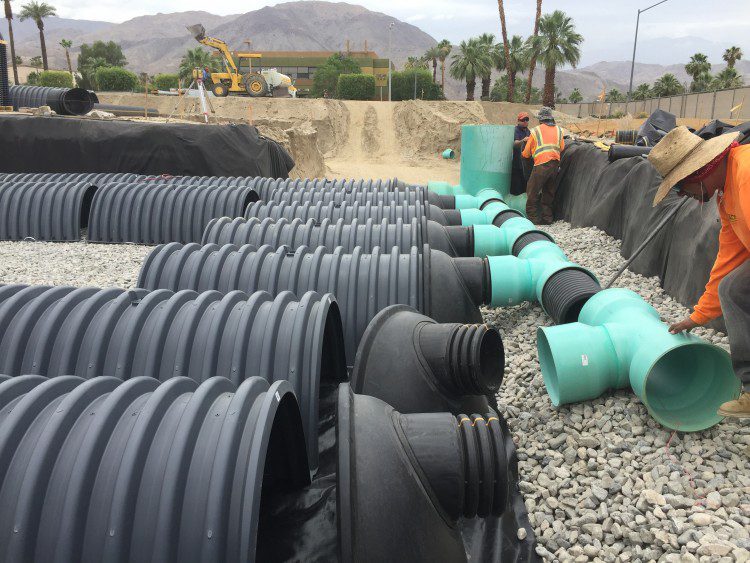 Regulations from the regional California Water Quality Control Boards have been in place for more than five years, requiring new projects and significant redevelopment to establish a Water Quality Management Plan (WQMP). The expansion of buildings or addition of new parking trigger this mechanism, and a priority is being placed on hillside development where erosive soil conditions exist.

A significant redevelopment in Southern California is one that adds or replaces 5,000 square feet or more of impervious surface on already developed land. Residential and industrial/commercial development trigger a WQMP when they create 10,000 square feet or more of impervious surface. Varied requirements are in place based on use (i.e. all new automotive repair shops must file a WQMP), proximity to existing outflow areas, and areas of environmental sensitivity (a WQMP is required for development of land within 200 feet of an Environmentally Sensitive Area).

Included in the WQMP are a conceptual grading plan; a preliminary drainage report that includes hydrology calculations, a map, calculations for sizing treatment control Best Management Practices (BMPs); and a preliminary geotechnical report.

The BMPs are established in handbooks and manuals that outline low impact development practices with design guidelines for such solutions as infiltration basins, infiltration trenches and bioswales, permeable pavement, rainfall harvest and reuse, bioretention facilities, detention basins and sand filter basins. These solutions all offer pollution prevention measures, erosion control, and the reduction of flow of stormwater out to the ocean.

“Each of the Regional Water Quality Control Boards have their own watershed-specific issues to deal with, and some issues are more challenging than others. On every new project, I have consultants and experts that I share project location, jurisdiction and watershed details with,” says Losey. “They help research the regulations and set up the WQMP with an understanding of what we can fit into the site and how we need to plumb it.”

Engineers factor in the percolation of the soil by drilling down and finding the depth of the percolation layer. They then work on a hydrology flow model with historic runoff and the soil data from the site to analyze both volume and flow rates. The goal is to meet the requirement to match stormwater flow rates from pre-construction to post-construction.

Conditions and cost dictate the type of solution that engineers specify and design for each project. The path that this decision making process follows starts with the detention/recharge question, which is dependent on soil conditions and the cost and availability of land.

A detention pond holds and filters the stormwater into the groundwater, but the cost of land makes that prohibitive for most metro areas in the U.S., especially land west of the north-south Interstate 5 freeway in California. Low Impact Development (LID) solutions is another choice, and can be a mix of permeable pavement, rain gardens, planter boxes and other landscaping choices. While LID offers more flexible configurations than an open pond for direct infiltration, it offers an unproven and limited design life while requiring high maintenance. The suitability of LID is also dependent on access to open and affordable land.

The most efficient choice for most commercial sites, especially those with a tight layout, is usually a multiple use system that features an underground detention or retention system buried beneath parking lots or green space. The choice between retention (where the goal is to trap and allow the water to slowly seep into the ground) and detention (where the water is trapped and slowly released into the storm drains) typically comes down to soils. Ideally, soil conditions allow for a retention system, which releases water back into the ground and recharges the aquifer below. This is especially critical in drought stricken regions like southern California. But where there is impervious clay or contaminated soils, the best option can be detaining water and conveying to another structure.

Subsurface retention and detention systems can be designed with stormwater chambers or large diameter HDPE pipe. The depth to the permeable layer of soil is a key consideration in the choice between the two. Chambers typically allow for eight feet of cover, while pipe can have up to 20 feet of cover. If the percolation layer is above 15 feet, chambers are the cost-effective solution. If it’s below 15 feet, then pipe is the choice.

Each of these underground systems includes a filtration device, which contributes to water quality. Sediment, debris and trash, automotive fluid and bacteria, all impact performance and ecosystem health, and make up the primary maintenance challenge. Federal regulations require that municipalities manage these items, not allowing them to be flushed into oceans and waterways by storm runoff.  A pre-treatment device helps to improve water quality while also enhancing infiltration.

Stormwater chambers offer several advantages over pipe. Their arched shape, with its increased volume over pipe, means that chamber systems give you more storage per square foot of detention facility. That makes them ideal for tight spaces. While you do lose some strength (requiring a shallower install), the large open bottom offers the best performance for critical water infiltration.

Chambers are also lighter in weight, so you can move them easily and install them quickly. They are easier to backfill because there are no haunches, as with pipe. There is also less excavation required given their shallow installation.

Chambers that are made from injection-molded polypropylene resin are lightweight while also resistant to environmental stress and cracking. They have a design life of more than 75 years.

Chambers are easily stacked, which has advantages for shipping and construction layout. They can be staged tightly and close to the job site, whereas pipe can take up to three quarters of the job site.

“It’s difficult to ship pipe, and being a manufacturer of pipe we can say this with authority,” says Efinger. “The beauty of chambers is that they nest like shells, and the shipping density is 10 times greater than pipe. The shipping and light weight stacking efficiency contributes to the cost advantages chambers offer over pipe.”

With chambers, you can get 22,000 cubic foot of storage on a truck, whereas with pipe that number is just 2,400 cubic foot. If you need 22,000 square feet, that’s a truck with chambers or ten trucks with pipe. 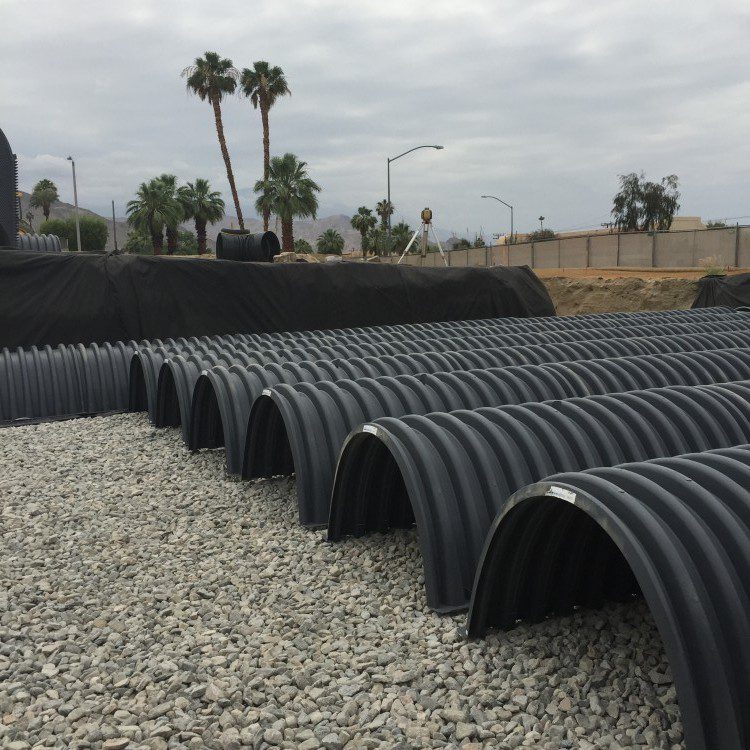 Returning water to the ground is an inherently green endeavor as it rebalances the natural cycle that supports life. Chambers offer an environmental win-win as they are better performing for water infiltration and require less of a mechanized installation.

“There’s a greenhouse gas component to consider, and we have been longtime proponents of using more modern materials,” says Losey. “We feel that where you can get fewer deliveries, it will have less impact environmentally with less emissions and less truck traffic, and will cost less. Using lighter weight equipment on-site also saves on emissions. In the case of chambers that can be handled by two people rather than swung by a crane, that really reduces the amount of time we have equipment running and putting emissions up too.”

Drought has a way of making the deficiencies of our water infrastructure glaringly apparent. There are lessons to be learned from California’s hardships in communities across the globe that are prone to similar drought cycles.

This approach, with its emphasis on infiltration, recognizes and places a greater value on water resources. Los Angeles County has just recently extended their stormwater guidelines to provide a framework for cities to plan and build aquifer recharge systems that go even further than past regulations.

“I’ve been practicing stormwater design in Southern California for nearly 16 years,” says Losey. “It’s gone from making sure your pipes are big enough and getting it out to the river and out to the ocean to a completely different approach where we’re looking to keep the water as close to the source as we can. Not only is that beneficial to the environment, it raises a whole new set of technical issues that keep me showing up every day because I know I’m going to be challenged.” 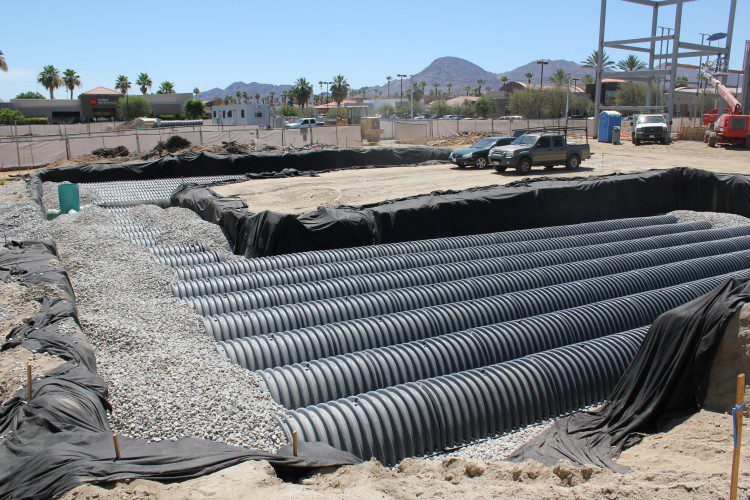 As published in Informed Infrastructure Magazine, August 2015, by Matt Ball